Blog: Polarising Debate And The RSPB 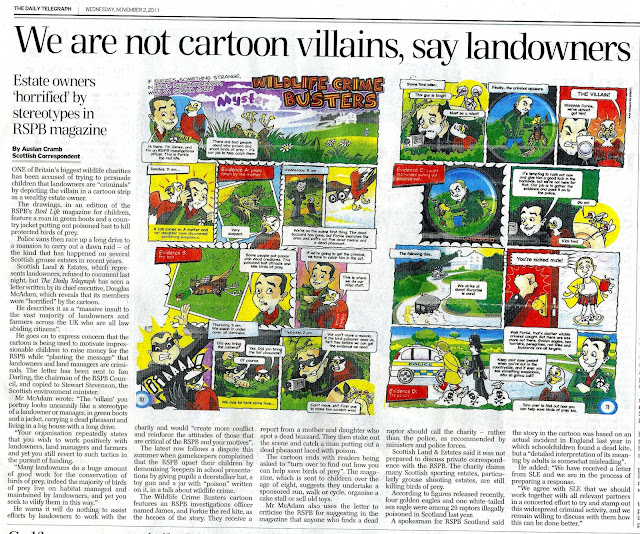 The RSPB blog: ‘A comment on some recent unpleasant events’, published August 4th, has created quite a bit of anger amongst the SGA membership, particularly at the same time as a Tweet, posted by RSPB investigator Ian Thomson, was attempting to make mischief for the grouse sector over mountain hares.

The first point to make, on behalf of the SGA membership, is that hopefully the RSPB employee on the receiving end of what Mr Harper described in his blog is safe, feels supported and is ok.

One of the things which can be agreed upon is that incitement to violence in public messaging is unacceptable, particularly when it involves staff members who are simply there to do their jobs, away from the front-line of a highly polarised snake-pit of ‘debate’.

However, it is wholly wrong and an extremely low blow for the RSPB to take the moral high ground on this issue and conduct some form of revision of history. There are not enough pots and kettles in the universe to make this stand. The most quoted comment we have received from members is “how dare they?”.

The RSPB media machine, for years, has worked very hard to bore away at working land managers UK-wide (see one image above from an RSPB publication, 2011). A rich conservation ‘business’, they have been highly successful in tapping into annual streams of public cash and managing to keep their metropolitan membership happy with colouring books for kids at summer fairs whilst the hierarchy tries to keep as quiet as they can about the role the RSPB has in things like tipping poison from helicopters on Gough Island and eradicating whole species of wildlife from geographical areas.

What they cannot do, though, is claim they have played no part in alienating swathes of working people who have major roles to play in ongoing conservation (but have to do so while making a living), free of the tranches of public cash which are meat and drink to RSPB. The RSPB are as much the architects of the poisonous media atmosphere which follows countryside issues, today, as anyone else.

It is only a few months since the SGA had to seek private assistance to investigate death threats to staff following a very public intervention by the RSPB’s Vice President Chris Packham into the attempts by farmers and gamekeepers in Strathbraan to secure a legal licence to control a tiny proportion of Scotland’s raven population in order to protect a disappearing red listed bird, described by the RSPB as the UK’s most pressing conservation concern. Not only that, following a public letter by Mr Packham- one of the most polarising figures in countryside politics today- encouraging everyone to write to SNH about the licence, even the Chairman of the nature body received threats on his life; his family home being guarded at one stage by private helicopter.

These are not idle comments by some rogue on a Twitter thread who’s had a few shandies. These are planned attempts to shut things down, disrupt the course of events and use BBC celebrity status, emotive and derogatory language and anything else to hand to change matters affecting working people in their own communities. Mr Packham’s dual role in RSPB- who claim not to be anti shooting - while he petitions the Westminster Parliament to ban driven grouse shooting- is another matter but, like predator control and the use of species control licences- land working people have become inured to the conflicts and apparent hypocrisies lying within this power-bloated organisation.

The most recent death threats are not the only ones received by SGA staff members. There have been others and equally as troubling to those innocent people involved, some who are no longer with us. The public messaging from RSPB has had a role to play in all of them, particularly around the time of the red kite poisonings in Ross-shire.

The RSPB may be many things to some people but they cannot cry wolf when they reap some of what they, themselves, have sown.

No one- including this RSPB employee- deserves the incitement of violence but the change of tone in public messaging is not, as Mr Harper puts it, just ‘more prevalent in modern life’, it has been going on awhile and RSPB, probably even before his time, have not been backward in coming forward when engaging in it.