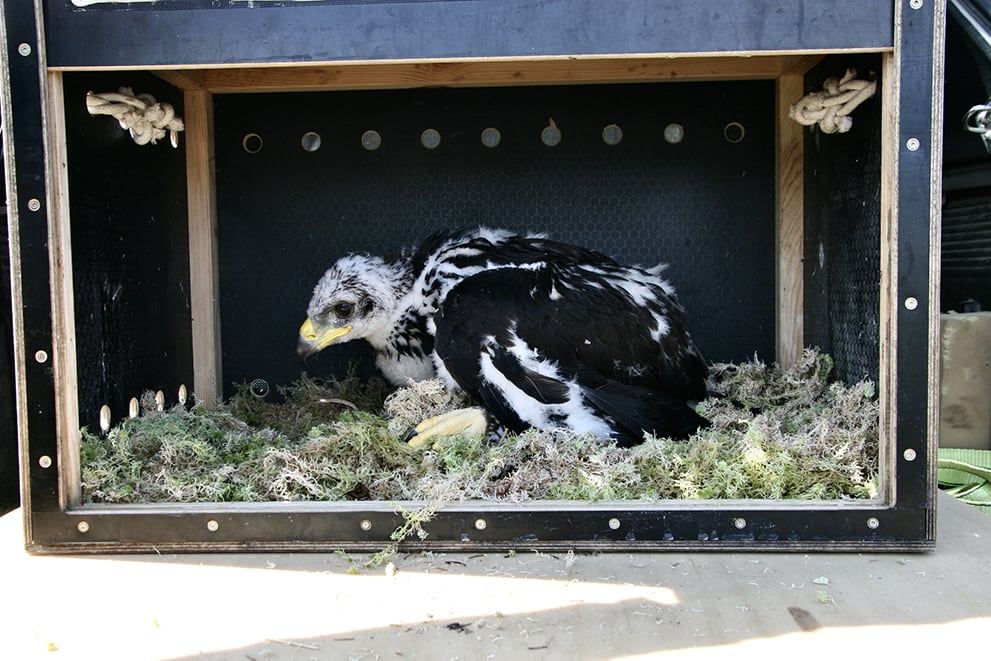 A grouse shooting estate in Strathbraan, Perthshire, is assisting conservation of the iconic Golden Eagle in Scotland by donating a healthy eaglet to a major population recovery project.

With the help of the estate’s gamekeeper, licensed climbers on ropes descended to a nest on a steep rock face overlooking a grouse moor in late June, safely collecting a 6.5 week old male eagle chick.

The bird has now been transported to a purpose-built aviary in the South of Scotland where, after being fed and prepared for release, it will augment the fragmented eagle population in the south of the country.

The work is a collaboration between the Scottish Gamekeepers Association, Tayside and Central Scotland Moorland Group and the award winning, multi-partner South of Scotland Golden Eagle Project.

While the recovery of the Golden Eagle to green-listed status nationwide is a success story in Scotland, the south of the country has seen challenges for the species. (WATCH THE VIDEO OF THE EAGLE COLLECTION BELOW- to watch in full screen, click the square symbol)

At one stage populations around the Borders and Dumfries and Galloway fell to just 3 breeding pairs before the first project eaglets were translocated under licence from NatureScot, to bolster the isolated population in 2018.

The project has now been running for five years, although Covid 19 prevented a translocation that year.

In June, two chicks from the successful nest in Perthshire, were carefully removed from the nest by the licensed and experienced SSGEP team assessed by an experienced team from the Royal (Dick) School of Veterinary Studies at Edinburgh university. 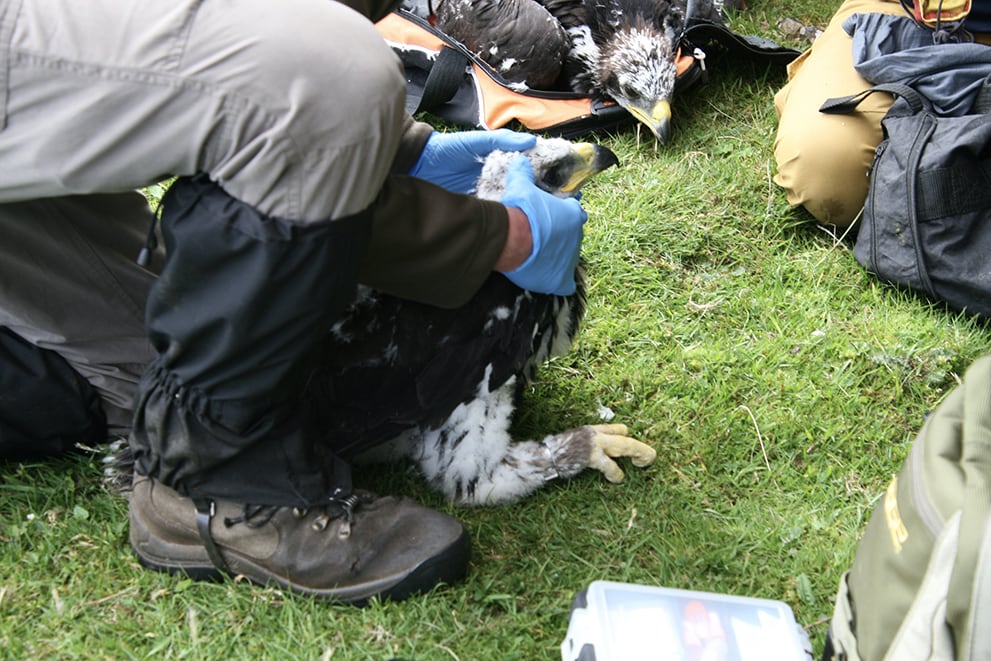 One chick was returned safely to the nest and the second was transported to aviaries in Southern Scotland.

The Strathbraan eaglet has settled in well with its new adopted sibling, is eating well and growing fast.

The Perthshire eaglet is one of six collected by the project team during the 2022 breeding season and this year’s birds will satellite tagged before being released in August.

Dr Cat Barlow, SSGE Project Manager, said: “We are very grateful to the donor estate and the team who aided in the safe collection of the eagle chick. This eagle chick from Strathbraan will soon become part of a growing population in Southern Scotland.”

The donor estate is part of the Tayside and Central Scotland Moorland Group and the gamekeeping staff are members of the profession’s representative body, The Scottish Gamekeepers Association.

Becky King, co-ordinator of Tayside and Central Scotland Moorland Group said: “It is good that one of our member estates is involved in the collaboration. We see a lot of eagles in the area, as do visitors, and this cements the working conservation happening on the estates and farms in Strathbraan.”

Alex Hogg, MBE, Chairman of The Scottish Gamekeepers Association said: “It is really pleasing to see our members getting involved in these collaborations. I also understand gamekeepers and farmers are also playing a key role, down in the release area in the Borders, because their land management is providing a food source to help the eagles.”