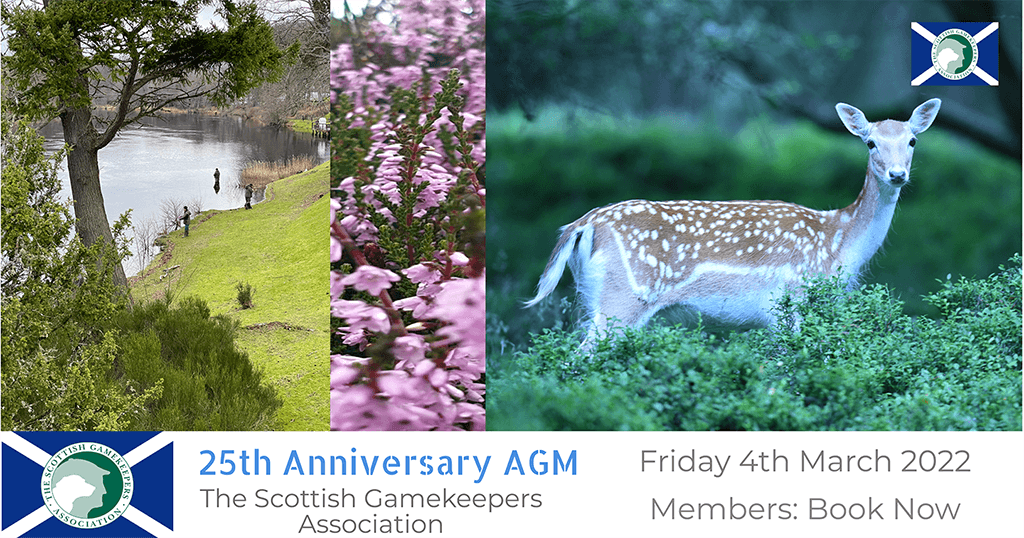 Lead shot alternatives, saving Scotland’s iconic salmon and insights from Natural England’s Hen Harrier project will be up for discussion as the Scottish Gamekeepers Association (SGA) hosts its 25th Anniversary AGM in March.

The speaker programme for the members-only event at McDiarmid Park in Perth on Friday March 4th will shortly be finalised.

Members are now being urged to book remaining places, with seats expecting to fill fast for the milestone gathering.

The SGA, which has over 5300 members in Scotland, was established by gamekeepers in 1997, with 2022 marking its quarter century as a representative body of gamekeepers, deer managers and ghillies of river and land.

SGA members work in a country sports sector which brings over £300m to the Scottish economy and sustains almost double the direct jobs created by the country’s largest conservation NGOs combined (4400).

Chairman Alex Hogg, who recently received an MBE from the Princess Royal for services to Gamekeeping, will open the event with a special anniversary            address.

Vice-Chairman Peter Fraser, who has been devising the Speaker menu, believes the programme    will befit such a historic occasion in the organisation’s life.

“All three speakers are covering important topics which will be of real interest to the members. Last year, we had to move to an online Political Hustings event because we could not meet, in person.

“It will be great to see the members again- we haven’t seen each other for over a year due to Coronavirus restrictions.”

Mark Bilsby from the Atlantic Salmon Trust will introduce the work led by Jess Rodgers and Angus Lothian in following salmon smolts on their journey from river to sea.

Tracking projects along Scotland’s West coast and in the Moray Firth are helping to provide insights into salmon migration patterns and the risks they face at home and beyond the coast.

Year One of the Moray Firth project actually revealed that almost 50% of the smolts were lost in our rivers before reaching open water; an outcome which surprised scientists.

Bradley Bourner will discuss the pros and cons of using copper bullets and night vision equipment in the management of deer; one of the Scottish public’s favourite species.

Stephen Murphy of Natural England is due to speak about the Hen Harrier Brood Management Trial which last year saw a record number of breeding birds across the border.

He will also offer his observations on the use of satellite tags and what the devices are showing.

“It will be really good for the members to hear things directly from people involved in these projects, on the ground,” added Peter Fraser.

One final speaking slot, which promises to add a different flavour to the event, is expected to be confirmed in the coming days.

Members are being asked to contact the SGA office to book their place now so that numbers can be allocated and catering confirmed.