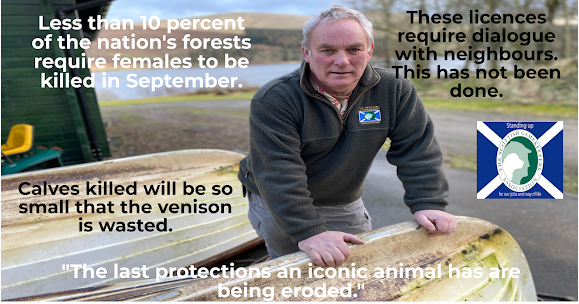 Below is the full letter from Alex Hogg, Chairman of The Scottish Gamekeepers Association, to the First Minister of Scotland, Nicola Sturgeon, on the subject of September female deer culls in the nation's forests, ordered by Forestry and Land Scotland.

I am writing to you today with a petition signed by 5000+ people across Scotland and beyond.

The signatories want a halt to the Forestry and Land Scotland (FLS) policy of culling female deer (under authorisations from Nature Scot) in the nation’s forests from September 1st. This date is 7 weeks before the opening of the legal season.

Many people will have signed this petition because of concerns for the welfare of dependent young who could starve to death if their mothers are shot and they, themselves, survive. At this time, some youngsters- particularly late ones- will depend on the mothers for survival.

Although best practice dictates that young should be shot before the mother, this will not always happen. It places a big responsibility upon individual deer managers. In September, vegetation is waist high. Young are easily camouflaged and can be missed. Similarly, it can be difficult to identify which calf belongs to which mother/family group.

These problems can be exacerbated by financial incentives which FLS, a public body, place on each deer culled. There is an argument that selectivity is not always best enhanced by a policy which rewards for the number of deer culled, as opposed to which deer are being culled.

In addition, the policy to begin culls on September 1st means that young which are shot will be very small.

Some game dealers will not collect carcasses under a certain weight and this policy will result in wasted venison, paid for by the tax payer. After consulting various game dealers, it seems this policy was not communicated to, or discussed with them, prior to it being executed. This seems an omission given the many problems the venison sector is currently facing due to Covid 19.

When the legal mechanism to allow the shooting of females from September 1st came into being, in 2012, it was contested. It remains so. In fact, The SGA was contacted by contracted deer managers, operating for Forestry and Land Scotland, who do not agree with it. Many of them were unhappy at having to carry out early culls but did not want to whistleblow. Some employed rangers feel the same. They were told to use the authorisations from September 1st. Many felt uncomfortable.

The welfare issue remains a concern for some. Secondly, the damage being witnessed did not appear to justify a Scotland-wide approach to culling females from 1st September. The feeling is that this is being done because it is a licensing tool available to be used rather than the tool being necessary, per se.

Due to lockdown, assessors have not been out in the nation’s forests. Any data justifying this action is based on modelling from 2019. Indeed, FLS made the Association of Deer Management Groups aware of their intention to begin this September 1st cull, back in January of this year. At that point, ADMG said they had to accept it, although they did not necessarily agree with it.

While we appreciate deer can do damage at any time, experts in forest deer management within our membership tell us that a/ there is enough vegetation at the moment for females and youngsters to eat.

b/ the only real concern in terms of damage by females in September will be new plantings and re-stock sites. Generally, after 5 or so years, most trees will be beyond the vulnerable stage.

The SGA accessed the latest UK forestry statistics for September 2019. These show that around 6 percent of the entire national forest estate in Scotland is under new planting and restock. This 6 percent, therefore, represent the forests most vulnerable to damage.

Give that, we question whether a Scotland-wide policy is appropriate, given that it is most necessary over only 6 percent of the national estate. Would targeted approaches not be more sensible, given that this licence remains contested and has the consequences which have been outlined above?

The same UK forestry statistics tell us that Scotland’s forests contain 265 000 hectares of trees aged between 21 and 60 years yet only 76 000 hectares of trees between 0-20 years (the age where damage can be a limiting factor). Despite this, the policy of culling females has been taken Scotland-wide, regardless of age class. The 0-20 age class represents 21 percent of the national forest estate.

This would seem to be a blanket policy, therefore, to reduce numbers by knocking deer over rather than addressing impacts. Recent Parliament committees have acknowledged that deer issues should be seen in the light of impacts, rather than just numbers.

Finally, one of the conditions for licences such as these are that those operating under them should have had prior dialogue and consultation with neighbours. This has not taken place. Neither did FLS discuss this with the SGA, which represents the largest number of on-the-ground deer managers in Scotland. The lack of consultation is a further reason the SGA is opposed to this Scotland-wide policy.

Given the above, and understanding the concerns about balancing deer impacts and trees/habitats, we ask that the licence be suspended until more targeted approaches can be fine-tuned which safeguard trees but also prevents the continued, drip, drip erosion of the final protections afforded to one of Scotland’s favourite and iconic animals.

I look forward to hearing from you regarding this.

*Notable area signatories are below.

EDINBURGH and the LOTHIANS: 169