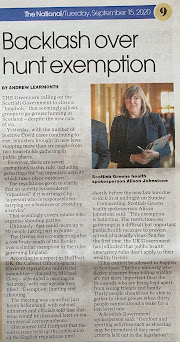 Scotland today: Tolerant, inclusive, progressive (as long as you are not a Scottish land worker or a wealthy person shooting grouse). If you are feeling disenfranchised, you may want to add your own special category.

Yesterday we saw the Scottish Greens’ version of the bright new Scotland it envisages. At either end of the class warfare scale, it is a pretty uninhabitable place.

It’s going to have a Siberian feel for people with money, even if they might help the economy by being amongst the tiny fraction of the Scottish population paying higher rate income taxes; funds which may help to fund things like new green deals, NHS and the like.

Also, it doesn’t contain rural working class families tied to land workers whose salaries are dependent on grouse shooting or, indeed, any other forms of shooting.

A pretty cold place too, then, for hard working folk who participate in community life in the villages that can feel distant and disconnected from the central belt politics which the middle class, white collar Scottish Green MSPs engage in, in their own high-brow bubble.

In a tolerant, inclusive Scotland, grouse shooting brings in circa £25m in a short window, employs 2500 people in remote glens and hamlets and, as Scottish Government-funded research has shown, has a disproportionate importance in some remote areas in terms of population retention and local area spend.

But that country is not what we are looking at, here.

Yes, there are hard pressed families in small places biting their hands off just now for the trade they are getting from the sporting season so far, even if it is a scaled back affair, like many things are in this new Covid normal.

In the Greens’ new Scotland, though, it will all be banned. Wealth creators? No home, here, for you, unless you are the right type. Land working families. Nah. ‘Live and let live’ is clearly an outmoded idea in the inclusive and tolerant new Green Scotland.

Scottish Government supports responsible country sports activity. Significant efforts were made, back in late Spring, between the shooting bodies and Scottish Government to construct guidelines to ensure a safe return for participants and shoot day staff. Country sports are amongst the other organised sporting categories which can continue if they are operating under approved guidance. These also include around 30 other sporting exemptions like kids football and all the basketball and hockey clubs that have been permitted to open under the routemap. Even paintballing is included, so at least some adventurous birthday parties will be able to carry on.

In the same way sports coaches are washing down footballs and goalposts, in line with guidance, gamekeepers are sanitising facilities and making multiple trips in additional vehicles to maintain social distancing. Masks are being worn, hand sanitising is now the norm. The guidance even looked at the implications of patting a fellow shoot member’s dog. If people are eating or staying over, the same granular rules now apply as to other caterers and accommodation providers. 6 max to a table, 2 households max. Masks on unless eating, etc.

The Scottish Green Party have done very well in exploiting the opportunities the pandemic has presented them to drive a relentless, class-driven bid to ban shooting sports. In fact, they have never had it so good, in that regard, as during the national health emergency.

Andy Wightman tagged the muirburn suspension into the Coronavirus Bill, even although Scottish Natural Heritage and Scottish Fire and Rescue Service were not recommending muirburn be stopped. In a reduced capacity Scottish Parliament, which did not even have a facility set up for MSPs to vote from home, they slipped the last minute mountain hare protections into a ‘tightly framed’ Animals and Wildlife Bill, bypassing any debate from the lead committee. A law which will affect none of their daily lives was ‘debated’ and signed off in a single discussion lasting around half an hour.

And now…this. Calculated and vindictive. On a day when the figures for people being made unemployed across the UK due to Covid headed ominously towards the 1 million mark, they would be happy to send others to the edge in small communities reliant on shooting.

Meanwhile the Green MSPs in Edinburgh go to work, take their 5 figure salaries, cushioned in their bubble, funded by the tax payer. Must be a cosy perch from which to throw their classist stones.

Image: comments by Alison Johnstone on the government's 'wealthy friends'. Gamekeepers' salaries must have shot up since last we looked.
Back to Latest News