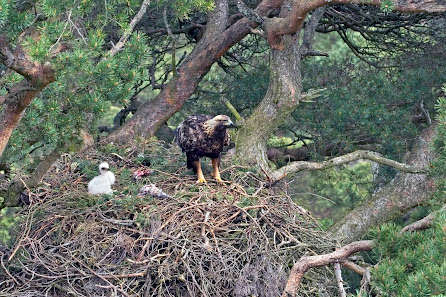 It is not easy to find scientific data to make comparisons between populations of certain species in different countries.

Scientific papers tend to be spread around the web. Some don’t seem to exist for many countries, perhaps because there is no need - or too few of a species- to justify the financial outlay to study them.

However, SGA Media has been doing a bit of research from open source material and, despite limitations which are freely acknowledged at the outset, some data sources provide interesting findings when it comes to making comparisons.

If you read newspapers or watch the BBC, or fixate on the negativity spoon-fed to media outlets from campaigning organisations you may be forgiven for thinking that, in Scotland, everything regarding iconic species is doom and gloom.

Only this week, multi-millionaire financier and environmentalist, Ben Goldsmith, was on Twitter bemoaning ‘nature deprived’ UK. These wailings are usually accompanied by a request for public funds to ‘save’ this species or that. Well, no one is going to cough up the cash if everything is alright. Right?

Not everything is alright. Some things are not alright. But, as these voices become louder and their demands on public funds- and their claim of right to public policy influence- becomes more vociferous, there is a need to apply some context. Even if it is to assess how not right something actually is, rather than taking the word of people or organisations with persistent political axes to grind or nests to feather.

Golden Eagles are an interesting study, particularly when you look at Scotland.

What you actually see, from the comparative open source research that exists, is that the birder wanting to see a Golden Eagle should not, as some campaigners make out, take a body swerve when it comes to Scotland.

Instead, they should be running towards Scotland with open arms and wallets. Relative to its land mass, Scotland has one of the highest populations of Golden Eagles in the world (from the open source research located).

The 2015 Birdlife International Report, ‘Reported national breeding population size and trends in Europe’ makes interesting reading. It’s not perfect. There are populations taken from different time frames (these are acknowledged, as the report acknowledges them), there are omissions from lack of data (ie: it cannot assess all data for each country because it is simply not available) but, in general, it is a decent starting point to make some broad, general comparisons.

We know from the 4th national population survey of 2015 (RSPB/SNH) that Scotland’s Golden Eagle population has risen to its highest recorded level (508 pairs) in modern times. This, in itself is great news. It is a hugely positive story. In only 12 years, there has been a 16 percent increase in the population, from the 3rd survey, undertaken in 2003.

We also know that Scotland is home to ALL of Britain’s Golden Eagle pairs.

The Index of Abundance for Scottish Terrestrial Breeding Birds, 1994 to 2018, also showed a 24 percent increase in the Scottish Uplands, where Eagles are reportedly afraid to fly because of persecution by gamekeepers (if you subscribe to that view).

However, sticking to the Birdlife International report methodology, we are going to take the previous survey figure (of 2003) as our basis because this is the one the report’s authors allude to. That figure was the lesser one, of 440 pairs.

So, what do we see from the 440 pairs in Scotland (land mass of 77 910 km2), compared to European countries of similar size, in that report?

In all these cases, Scotland is home to the most pairs of Golden Eagles ie: when it comes to countries of similar-(ish) land mass. 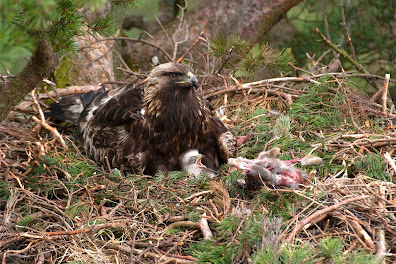 If you go up in size (land mass), we get to different breeding success levels.

The European countries listed in the report, which have the highest Golden Eagle populations, are:

So, when you add in these larger countries, Scotland’s (2003) figure of 440 breeding pairs would give us the 5th largest Golden Eagle population out of the European countries listed in the Birdlife International Report.

If we were to spilt hairs, we would say our latest population record (from 2015- 508 pairs) would put us ahead of France in 4th but, as stated, we will stick with the lower 2003 figure, to remain faithful to the source report. Even then, this is not bad for a small country in ‘nature deprived’ UK.

What happens, though, when you factor in the Golden eagle populations from that report, relevant to each country’s land mass?

Norway, with the highest population, has a land mass almost 5 times the size of Scotland (385 207 km2). Now academics and scientists will quite rightly say that land mass cannot simply be transferred over as a comparator. Some countries may have a large land mass but may contain large areas of land mass unsuitable for breeding eagles. This is wholeheartedly acknowledged and, in the absence of that level of granular data for each country, we simply cannot do that in this article.

Therefore, we are making broad comparisons. Scotland, too, contains populated urban areas unsuitable for golden eagle breeding and many people, when discussing land issues, like to make comparisons between Scotland and the landscapes of Norway and Scandinavian countries because they feel they are, in some ways, alike.

Using the same method of analysis (and acknowledging its limitations), Sweden’s 580 to 800 pairs dwarves Scotland’s 440 pairs - but not when you factor in land mass.

Next, we look at Italy. Italy is 4 times the size of Scotland in land mass terms (301 338 km2) yet Scotland’s breeding Golden Eagle population ( in comparison) would smash Italy’s by over 3 times.

Going by the same method, it would seem that- of all the datasets listed in the Birdlife International Report from 2015 - only Switzerland’s breeding Golden Eagle population would better that of Scotland’s.

At 320-340 pairs, Switzerland is just over 50 percent of Scotland’s land mass. That would make its tally bigger that that of Scotland, in comparative terms (640- 680 pairs).

With all the limitations inherent, it remains fair to say that Scotland’s latest Golden Eagle figures (2015) of 508 pairs are even more astonishing when viewed in a European context.

Russia’s Golden Eagle population seems huge, in comparison, at 500 to 1000 pairs. Yet, these eagles are taken from a land mass of 17.1 million km2. Scotland’s eagle population, on a per land mass basis, dwarves that of Russia many times over.

It is also fair to say, in general, that Scotland (comparative to land mass) is home to one of the largest golden eagle populations in the world.

This is not something you will ever hear. But it should be heard.

At 77 910km2, Scotland has 508 pairs of eagles. Each eagle territory can be between 5km2 and 150 km2 in size. If you factor in that Scotland’s White Tailed Eagle population is now standing at 130 pairs, then - relative to its size - Scotland’s eagle territories are filling fast.

We know, anecdotally, that this is causing competition between Eagles, as territories are fought over. Indeed, there is even a Golden Eagle death, in the official SASA wildlife poisoning report from 2019, attributed to the likely cause of intra-guild fighting between a Sea Eagle and a Golden Eagle.

What the analysis definitely shows is that, if you are a birder in Scotland, you are getting an absolute belter of a deal.

Persecution does exist. No one can deny that. The extent of it is hotly debated.

Whichever way the arguments run, the evidence shows that Golden Eagle populations continue to rise in this country and that Scotland is in an enviable position in European and world terms.

Are the people of Norway up in arms at the lack of eagles? Maybe if they looked to Scotland, they might find a case to be angry? Who knows. Compared to Scotland, perhaps the French should be hanging their heads in shame? Are they? What about Germany? Is Angela Merkel’s Government persistently harangued by campaigners seeking more and more legislation because Scotland’s Golden Eagle population is over 10 times times the size of theirs, despite Germany being over 4 times bigger? How nature deprived do the Germans think they are?

These are rhetorical questions, of course, but they are only cited to provide context. Context is something the Scottish public rarely get when it comes to these types of debates.

The truth is, when it comes to Golden Eagles in Scotland, we have never had it so good, whatever the external noise or the newspaper billboards suggests.

There are many in the gamekeeping world who would suggest that their management and stewardship has provided conditions to assist the rise in Golden Eagles in Scotland; a food source, a bountiful supply of mountain hare prey (some of the largest densities in Europe are recorded in Scotland), and the retention of open landscapes which have prevented the inexorable loss of good habitat which has been evidenced elsewhere. 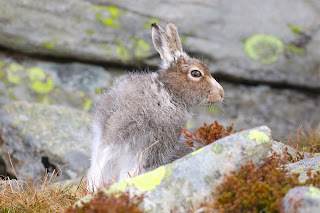 These issues will remain matters of (endless) debate. It ought to be noted, though, that the majority of eagles donated to Ireland for their Reintroduction project were taken from Scotland’s game estates. The South of Scotland Golden Eagle Reintroduction project, thus far, is showing a similar pattern, too, with Scottish game estates acting as donors. Is it not odd to hear references to ‘raptor deserts’ when game estates are giving the things away?

When game interests promote the benefits of their management for species, detractors often comment that nature was taking care of itself fine and well before grouse and deer took hold as an interest in rural Scotland.

Prior to gamekeeping, Scotland’s Golden Eagle population, in 1850, had fallen to 150- 200 pairs. It was a trend of decline which started in 1800 and only started lifting back out again around 1920 onwards.

What was the reason for that? We probably won’t know. But we know it is one loss that cannot be attributed to gamekeepers or grouse moors and we know that, since game shooting became a ‘thing’ in Scotland, the Golden Eagle population has risen, quite consistently.

Indeed, despite the woes and the campaigns, it is remarkable to think that Golden Eagle populations in Scotland have risen by 16 percent, even in the time period since Beyonce released ‘Crazy In Love’.

That cannot be all bad.

Scotland’s Golden Eagle population is a success story standing compare across the world. When it comes to Golden Eagles, Scotland is a great small country which should be proud of its stewardship in this regard.

Scotland contains all of the UK’s Golden Eagle pairs.

While persecution does exist (not solely in game management sectors), and it may be one of many factors in the history of Golden Eagles in Scotland, its domination of the contemporary discourse surrounding Eagles is disproportionate, particularly when placed in a wider, less insular, European and world context.

In the time since the introduction of game shooting, Scotland’s Golden Eagle population has risen at a fairly consistent level.

People wanting to see Golden Eagles should go to Scotland AND they will get even greater value for money, now, than they did in the early noughties.

‘The history of eagles in Britain and Ireland: an ecological review of placename and documentary evidence from the last 1500 years.’ Richard J. Evans , Lorcán O'Toole & D. Philip Whitfield. 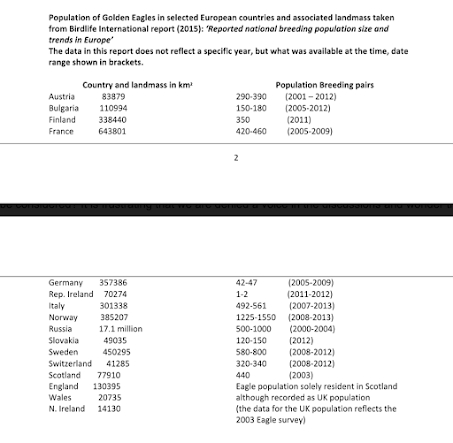