In the court of public opinion, you can’t beat a decent poll result to prove your point and it would seem there are some people out there at the moment who are deadly keen to get a poll result, whatever it takes.

In the day’s before the publication of the Scottish Government’s commissioned report into grouse shooting (which was, in the main, positive for grouse shooting), the League Against Cruel Sports published a poll it commissioned saying 7 in 10 people were against grouse shooting. Careful timing. It wouldn’t do, after all, to have proper, adult scientific research unpicking the group’s case, point by point. (Read the Govt research, here: https://sefari.scot/research/phase-2-grouse-research-socioeconomic-and-biodiversity-impacts-of-driven-grouse-moors-and

This ‘poll’ was part of their work with Revive, a coalition seeking to ban grouse shooting. There was no substantiation of the question the ‘public’ was asked on grouse shooting or how it was worded, framed or how the respondent selection was made or randomised.

As an animal rights coalition, for example, Revive deploy phrases such as ‘blood sports’, knowing this plays on the emotions of people who might otherwise have no opinion on grouse shooting at all, until having a clipboard waved in their face or an email sent. The words are designed to turn people against something. That’s the whole point.

Polls, unless they are rig-proofed through tungsten randomisation, can throw up interesting results.

While it was not an ‘official’ poll as such, the Herald decided to push a poll a few days after the League Against Cruel Sports, on whether readers were in favour or against grouse shooting. It was a good move for the Herald, as their audience and clicks on that particular page soared.

The poll was placed at the foot of the Herald’s coverage of the Scottish Government report and, perhaps unsurprisingly, it showed a healthy percentage of people in favour of grouse shooting.

Again, this was an example of how polls can be skewed one way or the other. A positive story from the Government report about grouse shooting followed by a poll. People predisposed to grouse shooting in a favourable way read the report and poll in favour. At one stage, the polls were sitting at those in favour being in the high 90s.

But then things started to change. The poll was shared on shooting sites during the day and also on pages such as Rewilding Scotland as the interest in a favourable result in this poll grew, albeit gradually. The interest wasn’t a burning one, maybe more a curiosity on both sides. The numbers taking it were not switching the dial, it was more dribs and drabs. People maybe voting, if they remembered to, after their tea-break, or if they had nothing better to do. After all, it was only a newspaper poll.

Then something very interesting happened.

At 7pm, the night before the poll was due to close, suddenly and inexplicably, the dial did switch- big time.

See the graph below. 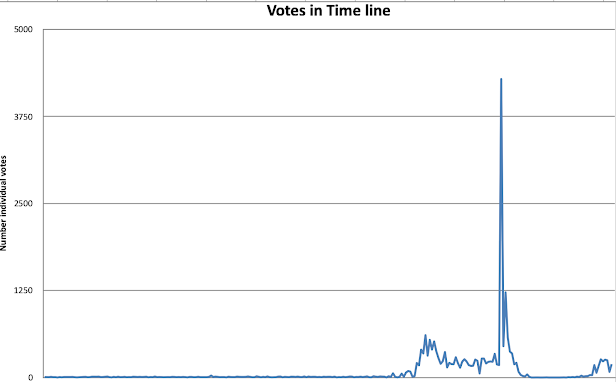 Now, it could be said that the spike was a result of one or two influential, high traffic, websites plugging the poll and that making the difference. This is possible, of course. We’ve seen it before. How some petitions manage to get over 100 000 signatures through intense canvassing lasting months, with celebrities, videos, blogs, quite a lot of smoke, mirrors and fliers on the streets of urban areas.

But this does not explain adequately why, precisely at 7.01pm, there was one single pronounced spike of 4287 votes, then the vote pattern returned to normal, bar one other short spike at 9pm. Prior to that, the vote numbers had increased maybe 100 to a few hundreds at a time, rose and dipped, reflecting the fact that people were switching on social media after work or eating, or whatever.

Whatever was behind it, we will never know but there was certainly something highly unusual going on. Unless this was some technical malfunction, there is someone or some group very keen to influence the outcome on what, or what not, can be portrayed as the ‘public’s’ opinion of grouse shooting, at this time.

On top of the Government’s report which said that two thirds of gamekeeper respondents to their wellbeing survey had received abuse and threats as part of their employment, gamekeepers should also be wary (when dealing with the mental health implications of this) that there are political lobby consultancies in Edinburgh making good money trying to do them out of a job and their house in the glen.