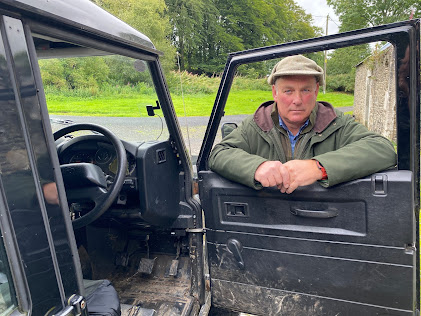 I got an email over the weekend from a long-time friend - an individual who has played a big part in the history of the SGA.

It was a letter he had written to the National newspaper about a story they ran last week.

The paper didn’t use it but he wanted me to see it.

This is a big time in Scottish politics. There are party conferences coming up, all the big environment groups are lining up demands. As well as pushing for laws, there will be big demands for cash. The papers are full of talk about the 2021 elections and Independence referendums and I am aware how hard it is for people working in rural land working sectors to be heard just now.

I thought I would put the email into in my regular blog because it is something I am hearing more and more of and it is something our members and members of other groups have spoken to us about. Where rural land workers sit today when it comes to Holyrood and the political system.

The original story which prompted the letter was talking about SNP members wanting a motion at conference which, when you read it, would basically amount to a ban on grouse shooting and many hundreds of our own members being out of a job and a home. It had been apparently written up with the help of Revive, who want grouse shooting banned. Here is the letter.

I am a retired gamekeeper and run a rural tourism business. I have supported the SNP most of my life because I think Scotland should make its own decisions here, not London. I don’t think people realise how many others there are like myself among the people who work on the land that have been supporting SNP.

Not everyone is a fan of shooting. That’s fine, I’ve argued the toss all my days. But I do find Ruth Maguire’s comments about employment and the environment confusing. She says there is little economic benefit in grouse moors compared to other land uses. That is not right. The latest report from our own Government, published in the last few days, says it creates more jobs than all the other studied land uses, per hectare. The Government report also says the management benefits some species like the curlew which is in serious danger of disappearing.

If we are going to make arguments, we have to get them right, especially when it is the SNP Government’s own reports. If not, it’s like the Boris bus and Brexit and I don’t think that kind of thing works up here. It saddens me to see the SNP turning rural voters away. I speak to a lot of people who would vote for Independence but they are unhappy the way rural politics is going and they are switching off from it altogether. The SNP has done well to win votes in the big cities. These people will vote for the party come what may because they want Independence but past election results are showing ground slipping in the countryside. That needs to be recognised if Independence is going to happen any time soon.

I’ve written about this topic before, when Pete Wishart and John Swinney received a lot of unfair criticism for attending an event hosted by BASC in Perthshire. Whatever party people vote for, politicians should not be criticised for listening to the constituents in their area. That is what they are paid to do. In my view, it is their duty.

There are a lot of big, wealthy groups lobbying hard against our sector and other land sectors at the moment, knowing that elections are coming up. Farmers, too, are caught up in battles over standards, future subsidy and the green lobby.

I can only hope that, whichever party a politician represents, that they give some consideration to the voices of the people living in their constituencies that rely on our sectors for their work and their living. Whichever party is the government of the day, Scotland’s economy, wildlife and environment will be much poorer if gamekeepers’ jobs were lost on the back of policies that are pushed through because they seem to have popularity rather than being the right ones.

I think how the rural areas vote will have an impact on the coming elections and even on Independence. My hope is that politicians on all sides take the time to listen properly and think about the arguments and consequences of their actions instead of bulldozing away people’s hopes and careers and cutting away big parts of our cultural heritage.