Thank you to Roger Burton for the latest SGA Fishing Coronablog, blog number 6. Here, Roger evokes the sights and sounds of Spring on a river bank and how we all miss them during this time. 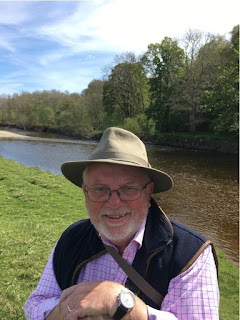 I write this a year to the week since I officially retired. Much of that time had been all I had hoped for; time to be more active in pursuit of my various outdoor (and sometimes indoor) interests for which Scotland caters so well.  By no means least among them being the pursuit of the pristine bar of sea-polished silver, the early returning salmon.
While now sadly, increasingly elusive, and all the more highly prized for that, the many blank days still provide rich rewards.
A day in the fresh air; honing casting skills, perhaps, thanks to modern rods and lines, not quite the same physical exertion it once was, but still enough for back and arm muscles to know they’ve been exercised at the end of the day; solitary concentration on the activity and the way your fly is coming round in the changing flow to the exclusion of more mundane matters; and watching as the wildlife, trees and flowers of the riverbank stir and burst into life with the burgeoning season. Forging deeper connections with nature by connecting with it through one of its marvels…the salmon.
So, as the days shortened through last December, and as sure as the years turn and winter passes into spring, my thoughts had turned towards making plans for the new season, and the chance again of one of those magical encounters.
With more time available to me, without the conflicting demands of work as the end of the financial year approached, and the constraints of juggling annual leave entitlements with family plans, I had been really looking forward to getting a few more days on the river, and perhaps with them, even increasing my chances of a fish or two. I’d taken a season rod on a local Tay beat, re-booked what had been an exploratory 3-day trip to an East Sutherland river with my fishing partner last year and extended it to a full week with a day’s golf on the links and 3 days fishing another new water in Caithness. In a very small way that would have helped contribute to the local economy there, bringing not only 14 bed nights plus meals and bar bills to the hotels, but also providing employment for a gillie and helping pay the wages for other river managers employed by those running the fisheries. This would be something to be replicated by many other visiting anglers over the spring, among them another small party renting two estate cottages that I had been invited to join as spring turned to summer.
But events, as they do, soon changed that.
After a mild, relatively gentle January during which I had managed to grab a short winter day without needing several layers of clothing, came February’s storms making fishing more or less impossible. That is just a seasonal and occupational hazard. However, as the almost incessantly high water levels began at last to subside with colder, but drier, weather during March, the Covid-19 virus that at first had seemed so far away in China, had become the global pandemic that was clearly going to have a big impact on everything.
When the principles of social distancing were first introduced during the delay phase, it seemed there might still be some hope that some fishing locally, might be able to continue in a way that respected their spirit. In certain circumstances this might indeed have been possible. However it would have given rise to inconsistencies between beats and between local and visiting anglers (who for many fishings form the majority of their customers), in turn creating ambiguities which might have put any fishery staff in difficult positions. However then came lockdown. With its simple, clear message and rules, the debate was curtailed, and all fisheries were closed.
At one level that was clear enough, but as others have written, it raised a whole host of questions for fishery managers and their guests with bookings in the months ahead. With so many different practical circumstances and business models for fisheries up and down the country, against the background of uncertainty as to duration of the restrictions, it wasn’t surprising that it took a week or two to begin to understand what the implications might be for deposits and advance payments. In my own experience, this has been handled as well as one might hope for in the circumstances, with bookings that had been paid for substantively being rolled forward to next year. From what I can gather this sharing of the pain has generally been the picture, and it is one that I am sure is widely appreciated. So too for the, I rather suspect frequently undervalued, work of the agents handling the awkward conversations and additional administration of these changes in booking arrangements when the income which funds their commissions has at best been halved.
So now, talk of how and when restrictions might be eased grows and that’s what Covid-19 has meant for me. As we move through what, for many, is the cream month for spring fishing, with newly green trees, blooming flowers and blazing whins adorning the  river banks and their straths, and the sights and sounds of waders, warblers, swallows and sand martins filling the air around them, I know it will help me enormously to face whatever the future may hold. I’m sure I’m very far from alone in that.
Back to Latest News