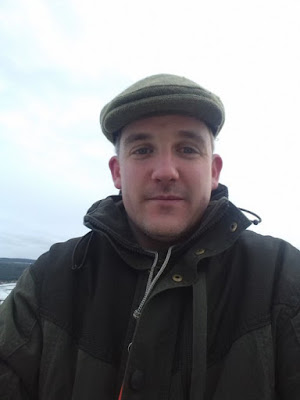 Around about now someone on the Stinchar should be catching the first fish of the season. However the whole country is in lockdown, fishing is forbidden and we are no exception.

Even without the lockdown it might have proved a challenge. The long period of drought that has created extreme wildfire conditions in neighbouring Galloway has also affected Ayrshire and the river has been very low for weeks. Anglers lower down the river might have had a chance but high up on the wee Stinchar, where I do my fishing, there  would have been precious little chance of a fish even without the lockdown. So at least I have the conciliation that I am not missing out on much.

However fish do not stop for lockdown and the smolt run has been in progress with shoals of the little fish heading out to sea or at least trying to. For the last few seasons the Stinchar has used Smolt shepherds to keep the growing numbers of cormorants away from the smolts. One stalwart resident of Ballantrae has been doing a particularly  dedicated job, getting up at the crack of dawn and basing his routine around the tide table to help the fish get through.

The smolt shepherds were hard at work again this season driving off cormorants when nature decided to throw a spanner in the works. The mouth of the Stinchar has always been exceptionally mobile and just at the peak of the smolt run a gravel bar shifted to block it completely, penning the smolts in.

The estuary is a SSSI so getting a machine in and howking the gravel out of the way isn’t an option without permission from SNH. An application has been lodged, but of course there are forms to fill in and stakeholders to consult and all the rest of the bureaucracy to be plodded through.... So for now the smolts will just have to hope for the best and trust in their shepherds until the SNH officers have done their paperwork.