The SGA Fishing Group is grateful to Ranald Hutton, all-round country sportsman and occasional SGA member (when shooting) for sending an entry into the Coronablog which turned into a wider media story in today's Courier newspaper. See: https://www.thecourier.co.uk/fp/news/local/angus-mearns/1314644/coronavirus-stunning-nhs-warrior-salmon-fly-set-to-land-auction-boost-for-frontline-heroes/
Here is the full story of Ranald's tribute to the NHS, taken from his Coronablog sent to the SGA office. 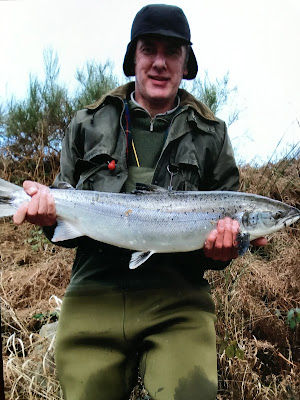 A former teacher and country sports enthusiast from Angus has revived a rare talent in tying intricate salmon flies to raise money for the NHS during the Covid-19 pandemic.

Ranald Hutton started tying trout and salmon flies at the age of 11 with his father Andrew- an artist at The Beano- and, at one stage, was classed as the best in the world.

For several years he ran a mail order business sending his bespoke flies to anglers across several continents before going on to teach Art and Design at Kirkland High School in Methil.

Recently, with the river banks silent due to restrictions, Ranald (66) who fishes as part of a syndicate club in Scone in Perthshire, found himself with some spare time on his hands.

After spending hours in concentration, his creation, ‘NHS Warrior’, which fuses the colours of the NHS logo as a mark of respect to frontline health staff, was announced the winner. 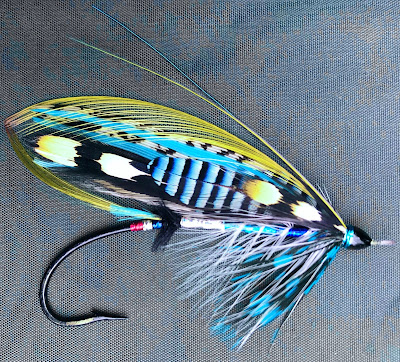 Now he is planning to auction the stunning creation as well as selling special mugs bearing the design, to raise cash for the health workers who are saving lives during the crisis.

“Tying the fly took a long time. It is a very meticulous process and there is quite a lot of exotic materials involved. I am actually just glad I can still do it and my eyes are still ok,” said the trained artist, who was briefly crowned best in the world when he won the Fly Dressers’ Guild competition for professionals in 1970, whilst only 16.

“It is a symbolic fly. With no fishing happening just now because of the pandemic, I decided to enter the competition. I considered the colours carefully, to assess how appropriate they were for the NHS. I am really quite pleased with how it has turned out.”

Ranald, also a skilled competitor in shooting and Field Archery, won the FishPal competition but is no stranger to having his creations admired.

Starting out with his first vice and materials as as boy, he tied flies for personalities such as comedian Jim Davidson.

His work was regularly stocked by suppliers such as the iconic PD Malloch’s of Perth and John Dickson and Son, formerly of Edinburgh.

Now he intends to mount NHS Warrior, adding his signature flourishes, and auction the fly to raise cash to benefit health service employees.

Special mugs donning the fly will also be sold, with proceeds going to the NHS through Captain Tom Moore’s heroic fundraising drive. 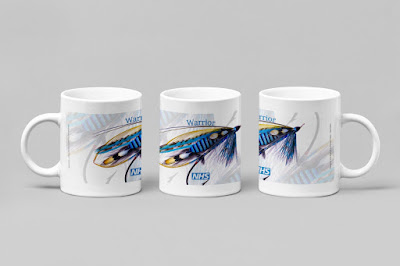 “All the doctors and nurses are doing such a great job just now,” he said. “Hopefully this will raise a bit more to help.”
Ranald contacted the SGA Fishing Group, standalone fishing arm of the Scottish Gamekeepers Association, to tell them of his intention and the backstory behind it.
A Spokesman for The SGA Fishing Group said: “What Ranald is doing is great and we hope lots of people bid when the time comes. It is another example of what individuals in the game sector have been doing to help others during the pandemic.”
Back to Latest News