Certain impressions have been created in recent weeks about things happening in the countryside with less people about during lockdown.
Some of our members have contacted us, confused. Rather than ‘less people’ being about, they are finding the opposite and want that, too, to be recognised.
For many people working and living in remote places, their experience is that activity on the ground has heightened, there are more strange faces than ever seen before and lockdown, access and exercise rules seem to have very broad interpretations.
Below is an image from a trail camera set up to monitor a legal crow trap. The light in the picture is the torchlight of an unknown individual approaching the trap at 11.31pm.
Upon seeing the camera, the individual became spooked and left. 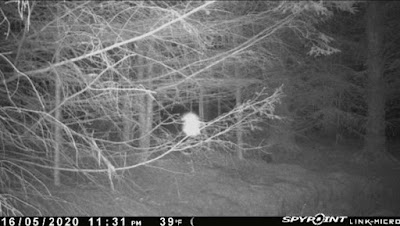 In the same area, a number of criminal acts involving legal traps and snares have occurred. Police have been informed and are investigating.
In recent weeks, the SGA office has been alerted to trap incidents Scotland-wide (some at over 2000ft), thefts, unauthorised filming, unauthorised monitoring, release of call birds and deliberate and premeditated activity to make trouble for estates and their workers. 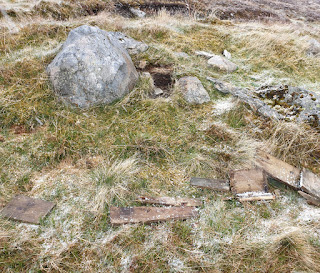 We have learned of an elderly gentleman being spat at in the face when asking someone to put their dog on a lead because vulnerable lambs and ground-nesting species were around.
Traps set up to catch grey squirrels to help red squirrel conservation have been tampered with.
With recycling centres closed, estates have had to put up with everything from couches to asbestos roofing dumped at their gates.
Not everyone likes certain things in life. Rightly so. Some people may not like to see traps and may choose not to acknowledge the benefits of legal trapping for farm livestock and ground-nesting species.
Differences of opinion are totally acceptable. What is concerning for our land managers, operating legal traps, is the view that wrecking them can be encouraged, snares should be tampered with and that criminal acts against people’s work equipment is the right thing to do (see some online activity, below, which has become normalised over recent years).
It concerns the SGA that this mindset has been allowed to take hold in Scotland, unchallenged.
While open to all, these special places are also working environments. For our members it seems that that perspective has been lost.
The SGA office asks that, in this difficult time, members should stay safe and stay vigilant.
Last year, a report was put together outlining third party illegal activity on Scottish grouse estates. You can read it, here: https://www.scottishgamekeepers.co.uk/pdfs/Survey-Findings-2019.pdf
*If people want to enjoy the wildlife on managed estates responsibly, they can visit the various regional moorland group pages and, particularly, the #WEHAVEWILDLIFE campaign.
There, they can see the many species that are benefiting from management, from pipits and moorland plants to raptors of all kinds. You can find them on Facebook. They are: Angus Glens Moorland Group, Grampian Moorland Group, Tayside and Central Scotland Moorland Group, Tomatin Moorland Group, Speyside Moorland Group, Loch Ness Rural Communities, Southern Uplands Moorland Group.