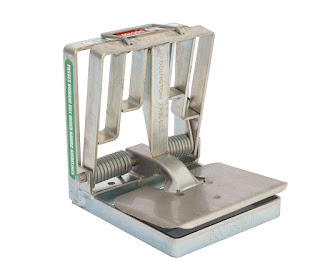 Designed by New Zealand's Conservation dept, the Doc 150 traps are the ones which have been delayed in Chinese ports due to Coronavirus security measures.

The Scottish Gamekeepers Association (SGA) has written to DEFRA Secretary George Eustice seeking a delay on the enforcement of new EU regulations on the trapping of stoats.

New laws are due to come into force on April 1st which will make some traps, previously used to manage stoat populations, illegal across the EU.

However, shipments of new, legally compliant, traps from New Zealand have been blocked in Chinese ports following the Coronavirus lockdown.

Gamekeepers who have paid for consignments of new Doc 150 model traps will now not have them in time and the SGA has written to DEFRA seeking a grace period.

Despite trap users being aware of the upcoming change, attempts to stagger orders to avoid overwhelming the manufacturers have been beset by external problems.

The project is deploying tens of thousands of traps across the island to eradicate stoats and the combination of large demand, the new laws and Coronavirus-related delays have left other trap users without legally compliant tools.

Stoat trapping is critical for predation control efforts at this time of year as ground nesting game and conservation-listed bird species are preparing to nest.

“We have written to George Eustice MP to explain that many of our members will not have compliant traps for April 1st,” said SGA Chairman Alex Hogg.

“This obviously compromises users because there is a need to comply by the law but, at the same time, there is also a need to limit predation of nests at breeding time.

“The whole issue could not have been unforeseen. What we have asked for is a short delay or a grace period until these shipments come through. No one can fully say exactly when this will be but a period of 3 months should see the backlog cleared.”

Richard McGill, who owns a business in Selkirk specialising in equipment for the game sector, says trap shipments are now requiring double the time to reach Britain.

He wrote to DEFRA in February to warn of the emerging situation and believes a short delay is reasonable.

“Estates in Scotland have staged their orders over the last 18 months, to comply with the new law and to avoid undue pressure on manufacturers all at once. I, myself, have been limiting single orders of several hundreds at a time to, maybe 100, to make sure everyone has some, but there have been a number of unforeseen consequences.”

The problems come at a time when the SGA is also seeking clarity on the new rules.

While old Mk4 Fenn traps will become illegal for stoats from April 1st they can still be used to trap some pest species such as rats and weasels.

However, should a stoat enter the trap as a non-target species, the law is unclear as to whether this would be classified as a crime.

The SGA has sought answers from Scottish Natural Heritage, to avoid gamekeepers unwittingly breaking the law, but have had no response to queries.

“It needs to be nailed down so everyone can be assured they are operating legally,” said Chairman Alex Hogg.

NB: The SGA has also contacted Scottish Natural Heritage today regarding the trap delays, to see what cross-border action could be taken.
Back to Latest News