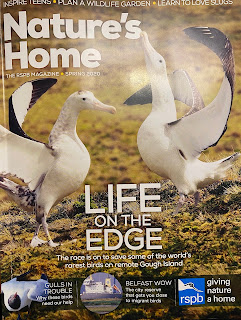 A member called the SGA office after reading a copy of the RSPB member magazine, Nature’s Home. She said she was impressed with the glossy mag, Spring edition, but wanted to highlight ‘confusing messages’ about climate change in the publication.
“It seemed like a case of do as I say, not do as I do,” was her view.
Also a member of RSPB, she said she enjoyed the conservation articles but felt the climate messages sat badly alongside ‘excessive’ pages advertising expensive and exotic foreign holidays involving high carbon travel.
There were adverts for tours to Africa, Asia, Australasia, the Americas, Canada and Patagonia despite a parallel single page on RSPB’s eco friendly travel partners.
Adverts included high carbon emission combined fly-and-drive holidays.
The main leader comment article in the magazine by the Chief Executive talked about how the charity took part in September’s global youth and climate strikes, while lamenting that evidence of our impact on the planet was all around us.
There were further articles talking about ice floes melting and new records for CO2 emissions, with pleas for politicians at the 2020 London Climate Change Summit to put the world’s future before their own interests.
Conservation Director Martin Harper used part of his column to talk about the need for urgent action to tackle climate and ecological emergency.
According to the Scottish Green Party website, "Air travel is the most polluting mode of transport by far- the amount of carbon emissions generated is significantly higher than any other common consumer behaviour.”
* On checking for accuracy, the 100 page magazine carried 14 and a half pages of international travel adverts with a further 5 pages of UK tours potentially requiring flights for those outside the British Isles -  a fifth of the magazine.
The advertising from overseas travel companies would be worth a considerable amount of money to the RSPB.
RSPB Vice President Chris Packham campaigns with Extinction Rebellion whilst also financially benefitting from overseas tours on his official website.
Back to Latest News