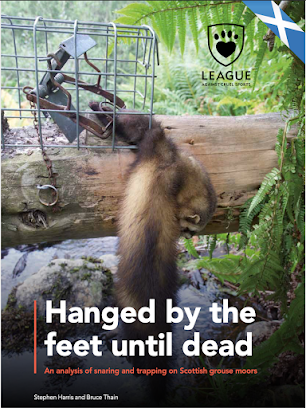 Today, the League Against Cruel Sports, released a document on trapping in Scotland (image above).

The SGA has issued the following response to the media. We would also encourage readers to reference the links at the foot of the media response plus the final link- the response issued by Scottish Government (5th August) to a Petition by OneKind calling for a review of animal welfare implications of trapping and snaring in Scotland.

Please find below a response from The Scottish Gamekeepers Association to League Against Cruel Sports report on trapping, released today (August 13th).

A Spokesman for The Scottish Gamekeepers Association said: “It is more customary for us to answer press queries on genuine research. This is not that. This is a tactic by an animal rights group designed to cause as much noise as possible around the 12th August.

“The document, which is not a peer reviewed report, is riddled with fag packet estimates and wild extrapolations, major confusions over what is legal and what is not and ‘facts’ from discredited papers from the anti grouse moor group, Revive, which have already been exposed.

“For example, one of the named estates in Inverness-shire, which has photos in the document, actually had its traps assessed and approved by the local Wildlife Liaison Officer.

“This propaganda document is cobbled together by an anonymous ‘investigator’ and authored by an individual, Professor Stephen Harris**, who was called out by fellow academics for misrepresenting science, only to leave his post at Bristol University by mutual consent weeks later.

“His funding by animal rights groups over many years is worthy of an investigation in itself.

“Scottish Government’s own nature advisers, Scottish Natural Heritage, conducted a thorough and independent review of crow trapping only a few years ago. Stoat traps have recently been overhauled by EU legal changes.

“While it is now sadly customary for rural debate to be blindsided by alternative facts such as this latest attempt by LACS, we hope Scottish Government sees beyond the agenda and treats this with the disdain it deserves.”

Response by Scottish Government to the Petition by OneKind: (5th August):