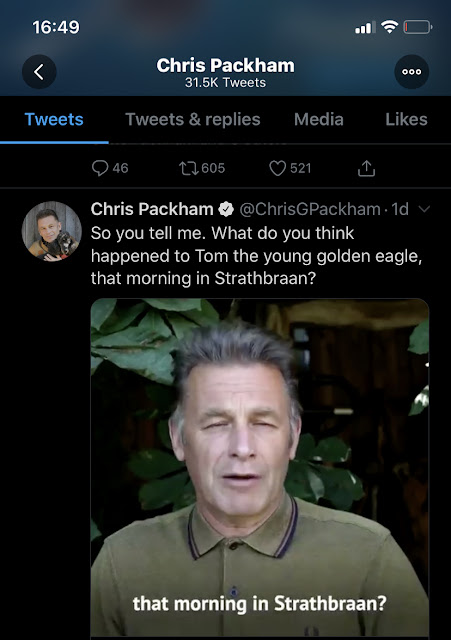 Last month, members of Tayside and Central Scotland Moorland Group made a plea for satellite tags fitted to raptors to be monitored independently and not by campaigners.

Their reasoning was that campaigners fitting the tag and paying a company for the data can interpret that data and use it for their own media objectives, without law enforcers actually being able to identify any evidence (not even a feather or a thread of cloth in this world of major DNA advancement) of criminality at an alleged crime scene.

In certain cases, there is actually no concrete evidence to suggest that the bird is even dead at the time media coverage begins to land on timelines.

The publicity objective, principally, is to call for a ban on driven grouse shooting or to attempt to influence Scottish Government to introduce a licensing system.

Some members of the Tayside group plus local shepherds, community members and families had been out, combing the hills looking for golden eagle, Tom, whose last signal had come from a grouse moor in the area. Landowners had issued an appeal for information.

They were not happy at, again, the prospect of being smeared and were hoping beyond hope that something could be found to lay some of the allegations to rest. Theirs is now a world where there is no protection from such allegations.

Yesterday, Golden eagle Tom was the subject of a campaign video- just ahead of the grouse shooting season on 12th August- involving Chris Packham, Ruth Tingay and Ian Thomson, the trio involved in a similar video about Fred the Eagle not all that long ago.

In that incident, the same trio signposted Fred the Eagle’s demise to a grouse moor in the Pentland Hills; something which the Police never really bought into, although all the proper investigations were carried out.

To this day, despite generating millions of pounds of media coverage, eliciting an interview from a Government Minister and stoking ire amongst everyone from councillors to Parliamentarians, criminality has not been established in the case of Fred the Eagle. There is no evidence in existence to suggest it was killed by anyone connected to a grouse moor in the Pentland Hills which can only ever manage to shoot a few infrequent family days for the pot because of the huge amount of public access from the city of Edinburgh. Fred never spent any length of time on that moor.

It didn’t help the course of an investigation that satellite tag information was handed to Police in an unorthodox manner, and in two stages, because those who fitted the tag (the people making the video and media claims) had yet to interpret all the data before giving it all over to those who actually enforce the law in Scotland. It might be presumed, in a just country, that the Police would be better making those interpretations. If that cannot be done, then a mechanism ought to be introduced where the Police are assisted in doing just that, which is what the SGA would like.

It did not help, either, that Chris Packham was busy making a second publicity video- a further interpretation- before Police were actually handed all the tag evidence. It was like running a major court trial where there was no need for any judge or defence. The verdict had ostensibly been delivered.

Whatever happened to Fred the Eagle, the conflicts between campaigns, publicity and justice were more than amply highlighted, in a very public way. It was this embarrassment which sparked The SGA to petition Parliament on the need for satellite tags to be monitored by neutral bodies who did not have such an inordinate amount of ‘skin in the game’.

Ruth Tingay has been involved for many years as the central author of a previously anonymous website whose rationale is to end driven grouse shooting. Chris Packham has petitioned the Westminster Parliament calling for exactly the same thing.

There can be no doubting the ‘skin in the game’ with this pair. Ian Thomson- an RSPB investigator- has seen his impartiality placed under recent spotlight. Last week, a teasing tweet on his private account literally set a Twitter hare running; the implication being that grouse gamekeepers were possibly shooting mountain hares. Twitter’s hounds of hell descended and, in a few hours, there were tales of hare ‘slaughter’ being shared on pages such as Scottish Raptor Study Group. Mr Thomson seemed to want to explain his tweet away as an innocent ‘question’ after it was all exposed as lies. He wasn’t fooling anyone. See a blog on this, here: https://news.scottishgamekeepers.co.uk/2020/08/blog-comedy-of-mountain-hare-twitter.html

What is perhaps more concerning is that tax payers’ money goes into paying for RSPB’s investigative services and also into the coffers of Scottish Raptor Study Group monitors who provide data on raptors. Their political agendas are barely hidden yet both are now firmly part of the establishment which influences how wildfire crime is handled today at a national level in Scotland.

In Mr Packham’s video about Tom, he did state that he did not know precisely what happened to Tom. He didn’t need to. The signposts and insinuations were all there. In terms of public perception, it was job done.

What this case does, in our view, is highlight again why satellite tags fitted to raptors ought to be monitored independently. Whether Scottish Government chooses to licence grouse shooting or not, who knows. It is not the central question.

However, individuals and communities deserve to be protected from smear and allegation. Two sides of a story ought to be heard in a country which prides itself on justice. If due process is followed and evidence suggests someone is guilty, be that on their own head. The playing field would be level and people could have no complaint. No one is seeking special dispensation from the law. The SGA, for one, would wholeheartedly accept the conclusions of a fair and honest process.

However, this process- as it stands- is neither fair or honest and, if judgements are to be handed down through the media by celebrities and those with ample skin in the game, it simply denies the rights of the other side to defend themselves properly, other than a few paragraphs at the tail end of a story which has already damned them.

We agree with Mr Packham, no one can know what happened to Tom, but there are a number of things to consider.

As RSPB themselves stated, when Hen Harrier Brian’s last signal was sent from one of their own nature reserves in the Cairngorms National Park in 2016, tags only offer an ‘indication of where a bird has been’. They cannot establish causality. Similarly, tags will be programmed to give readings at specific intervals, for example hourly or more. Birds, if they have come to an end, could travel some distance from the last received signal, making that last signal less meaningful.

This is a crucial point which deserves independent analysis. Birds will- and do- spend time around moors because there is a food supply. Perhaps it explains why even some Police officials will state that final searches are often more procedural- although thorough- rather than being conducted with any real hope of finding clues. Why are there never clues at the site of the last signal, not even a solitary feather that can be tested in a lab? Is the last signal site actually that meaningful at all, beyond ‘indication’?

The South of Scotland Golden Eagle Reintroduction project is an interesting case. A female eagle allegedly killed two other eagles in a territorial battle. All birds were tagged but only the body of one of the two dead birds was found despite land being walked with trained dogs. That 2nd body is still missing. Campaigners say that birds which have died without human intervention are found and birds illegally killed are not, because criminals hide both body and tag.

This case turns that on its head. No bird, no tag, nothing found: yet no one has called out ‘persecution!’

If that tag data had been held by campaigners, would they have alleged persecution?

Satellite tags can stop with no warning if they are subjected to trauma. Birds fighting can be a cause of trauma, as above.

What is known is that Tom flew into an area of Perthshire (not his natal area) where there are already eagles. Indeed, independent bird monitors recorded an eagle in exactly the same location just hours after Tom’s tag last signalled. It is not beyond plausibility that territorial tussling occurred over that territorial area.

Similarly, there are 2 wind turbines three quarters of a mile from where Tom’s tag last signalled and 16 turbines about a mile and a half away. It is not beyond possibility that Tom could have entered those areas. Indeed, turbines and bird strikes are recorded the world over.

Other reasons for tag failure can be simple technical malfunction. Any piece of electronic equipment can fail without prior warning. Unfortunately, you don’t always get a friendly message urging: ‘download your data because I’m going to crash in around 1 hour 35 minutes.’ In addition, place this equipment in the wilds of Scotland, in all weathers, and there is an additional possibility of malfunction.

Some other potential causes of tag failure are:

*’An Investigation into the accuracy and performance of a lightweight GPS tag used to track wildlife.’ Paul Duffy, 2010. Dept of Spatial Information Sciences, Dublin Institute of Technology.

If a gamekeeper killed Tom, they deserve everything coming to them. The SGA would condemn it wholeheartedly.

But satellite tagging has become political. There are too many people with too many agendas (on all sides). Some neutrality must be brought to bear.

If you would like to see independent monitoring of satellite tags fitted to raptors, why not write to Nicola Sturgeon firstminister@gov.scot