Blog: The Comedy Of The Mountain Hare Twitter Story 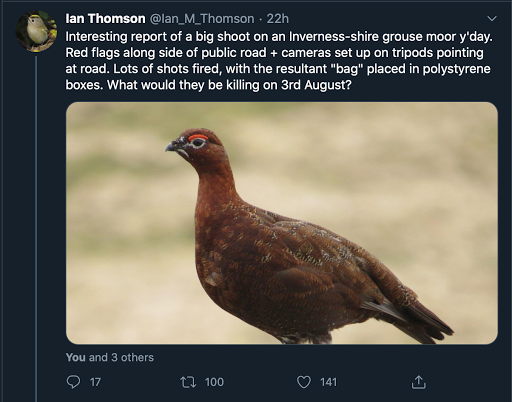 How to set a hare running. Literally.

Above is a tweet by RSPB’s wildlife crime investigator, Ian Thomson.

Why would Ian Thomson, an investigator who- because of his position within the law- obviously values the rule of evidence above all else, want to set a (mountain) hare running with a half-baked tweet implying that hare shooting was taking place on an Inverness-shire grouse moor?

Of course, he wouldn’t be aware that such a tweet would set the Twitter echo chamber booming and bring to heel all the extremists which no longer look as if they are merely on the fringe of the RSPB, for whom Mr Thomson is employed.

After all, how could the poor investigator imagine that this would be the consequence? He is in a profession, where truth, neutrality and the law are the prized currency, not politicised Twitter campaigns.

Indeed, impartial investigation must be why SNH have paid RSPB for their investigations services down the years, using Scottish tax payers’ money.

The relevance of this will not be lost on anyone in Scotland who has become accustomed to the tactics of RSPB, extreme campaign groups such as Revive, the Scottish Green Party, the animal rights mobs and the conduits between them all, when they smell blood and want to pressure a nervy Scottish Government, increasingly dislocated from the countryside, into making decisions to benefit their own interests.

Since then, the coalitions have been pressurising Scottish Government to move away from their stated position in the Parliament, on the day the Animals and Wildlife Bill was passed, that they would not rush to ill-considered legislation on mountain hares without consulting relevant stakeholders about how a licensing system for managing hares would work.

That would make some sense, given grouse moors are the only places in Scotland which now have mountain hares in any number (up to 35 times more than non-grouse moors).

So, how do you get your way? You go looking for pictures of gamekeepers legally killing hares, use words such as ‘slaughter’ and ‘organised shoots’ a lot and, if none of this is happening- well,… you can always imply that it is. Nothing to lose, lots to gain.

A few tweets, the drums start beating. Hell, even Dr Ruth will write a blog on ‘unconfirmed reports’ and Scottish Raptor Study Group (again a non-politicised group paid for using tax payer’s money) will retweet it and keep the jungle drums beating. Tag in the relevant Ministers, urge the belligerent to write to Mairi Gougeon and Nicola Sturgeon to ‘stop the slaughter’ and to accuse them of ‘blatant disregard for Scotland’s protected wildlife’ and sit back and wait until Govt loses its bottle. Job done.

Premeditated, calculated, political, mischief making. The stuff for dark arts practitioners but surely a line not to be crossed by impartial investigators in the law.

We know what the Inverness-shire red flags and ‘shots’ were and it was nothing to do with mountain hares. It is very comical, though. Only the politically desperate or people with fantastical imaginations would confuse target shooting with benchrest rifles (the ‘cameras’ on tripods) as ‘a slaughter of mountain hares’; or the hanging red flags to be sinister attempts to keep observers away (they were for wind readings and to keep the public safe and out of the line of fire). The boxes were rifle cases.

The Angus ‘reports’ are on the entirely falsified end of ‘unconfirmed’.

Then again, truth or proof, in rural matters- it seems- does not matter any more.

If you are fed up of this relentless castigation of hard working rural land workers by cash-rich campaign groups who will use any tactics to put families out of work and on the dole, tell the same Ministers copied into all the seedy tweets. 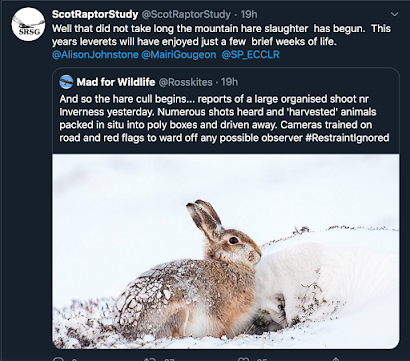 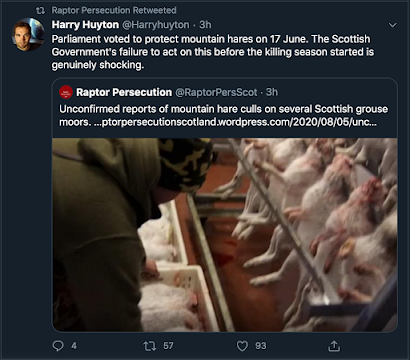